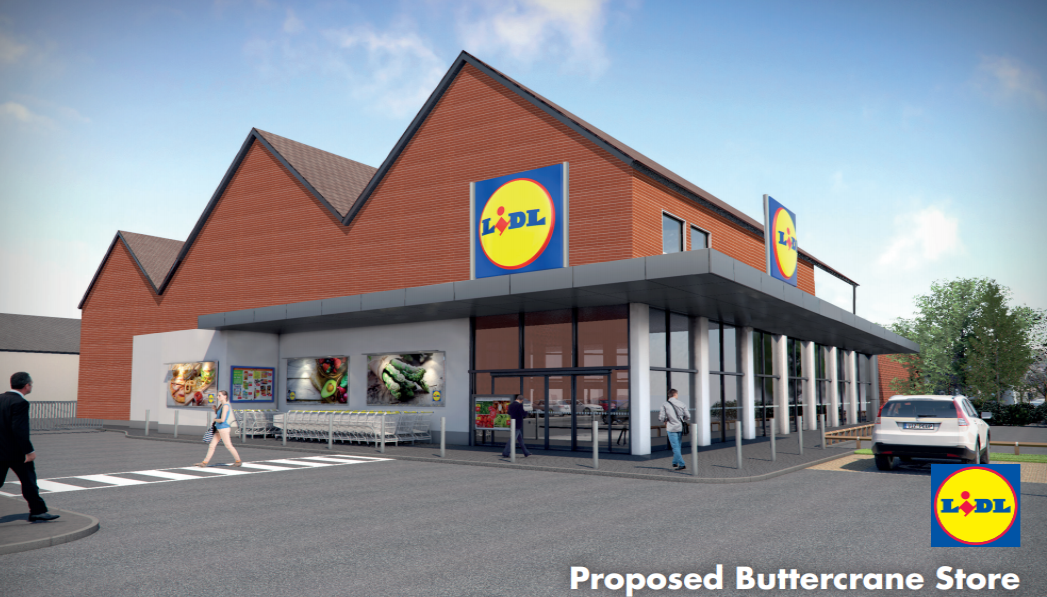 The brand-new state-of-the-art store at Buttercrane Shopping Centre will see Lidl relocate from their existing store beside Bagenal’s Castle on Abbey Way and will transform a strategic site in the heart of Newry city which has lain vacant for almost a decade.

The store will occupy an entire space of 2,190 sq. metres, including an expansive sales floor of almost 1,400 sq. metres, and replaces a unit previously occupied by Easons, as well as part of the former M&S space.

First opened in 1988 and located alongside the canal, Buttercrane Shopping Centre has played an important role in developing the city’s reputation as one of the best provincial shopping destinations in Northern Ireland.

“We are delighted to confirm that work is now well under way to create a new, exceptional and transformative store right in the heart of Newry city which reaffirms our investment commitment to create new job opportunities and to bring our successful Big on Quality, Lidl on Price proposition to more shoppers across the region.”

The region’s fastest-growing supermarket retailer, Lidl Northern Ireland opened its first store in Newry more than a decade ago at Bagenal’s Castle and added a further store at Damolly Retail Park in 2011.

Designed to accommodate growing customer numbers in a new, modern and convenient location, the new store at Buttercrane Shopping Centre will replace the Bagenal’s Castle outlet which will remain open during construction.

“As a major investor in our team, our communities, suppliers and in our local economy, Lidl Northern Ireland is at the forefront of exciting new retail growth and I’m delighted that our bright, modern and futuristic new store in Newry will help to regenerate and revitalise an important part of the city,” Conor Boyle added.

The company employs more than 1,000 staff across its 40-strong store network and Regional Distribution Centre in Nutt’s Corner, Co. Antrim, and recently announced it will recruit an additional 170 employees this year.

Lidl Northern Ireland contributes around £180 million a year to the local economy, sustaining 3,500 jobs while buying and exporting as much as £290 million worth of local goods and products.